EXPLORUMENTARY
On a pre-dawn Saturday morning in late October 1993, six determined hikers gathered in Palm Springs, California at the base of Mt. San Jacinto for the First Annual Cactus to Clouds Challenge.  During the next 12 hours, they would hike 10,300 feet of elevation to San Jacinto's summit and then back down to the Palm Springs Aerial Tramway Mountain Station.   Anticipation filled the still desert air and excited conversation ensued as daypacks, boots, walking sticks, and water bottles were  hauled out of cars and onto the sand. ​ 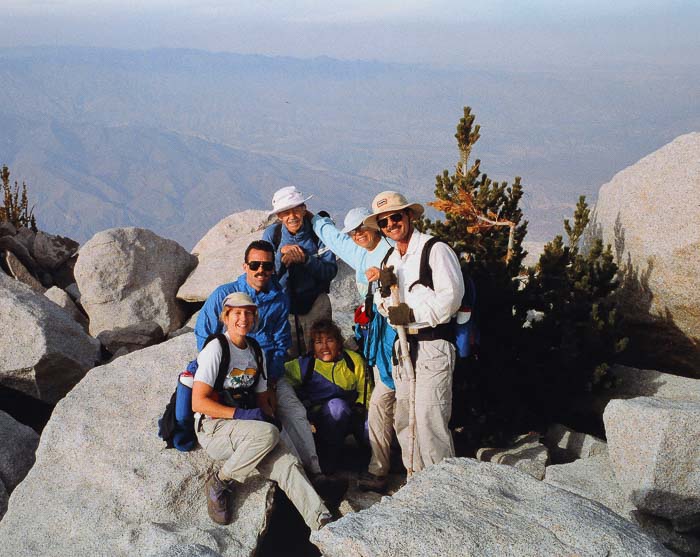 First Cactus to Clouds Challenge, Summit of Mt. San Jacinto, October 1993
From left to right:  Sue Birnbaum, (forgot his name), Roger Keezer, Maria Keezer, Ray Wilson
Seated in middle:  Vickie Kearney
Their plan
Ascend 10,300 feet in 16 miles to the summit of Mt. San Jacinto via North Lykken Trail, Skyline Trail, and San Jacinto Peak Trail.   Then, descend 2,300 feet in 5.5 miles to the Palm Springs Aerial Tramway mountain station.  Based on a “practice run” done previously by Sue Birnbaum and Ray Wilson, the group planned on completing this hike within 12-13 hours.  After completing the hike and arriving at the mountain tram station, they would then ride the tram car down Chino Canyon to Palm Springs followed by dinner to celebrate their ambitious achievement.  The light from their headlamps illuminated their faces and the brittlebush at the North Lykken trailhead at the end of Ramon Road.  The hikers needed to cover as much elevation as they could before the sun delivered its relentless heat.  The ultimate hiking challenge that they had been training for was about to begin.  They shouldered their packs heavy with water bottles and food and pointed their headlamps onto the trail.  With gravel crunching under their boots, they started single-file and quickly finished the 1.6-mile, 900-foot elevation gain North Lykken Trail in the dark.  At the intersection with the Skyline Trail, their headlamps shone upon white words painted onto a huge boulder:  “No water on trail until Round Valley Ranger Sta., 8 miles, 10 hours”.  The first Cactus to Clouds hike was officially underway. 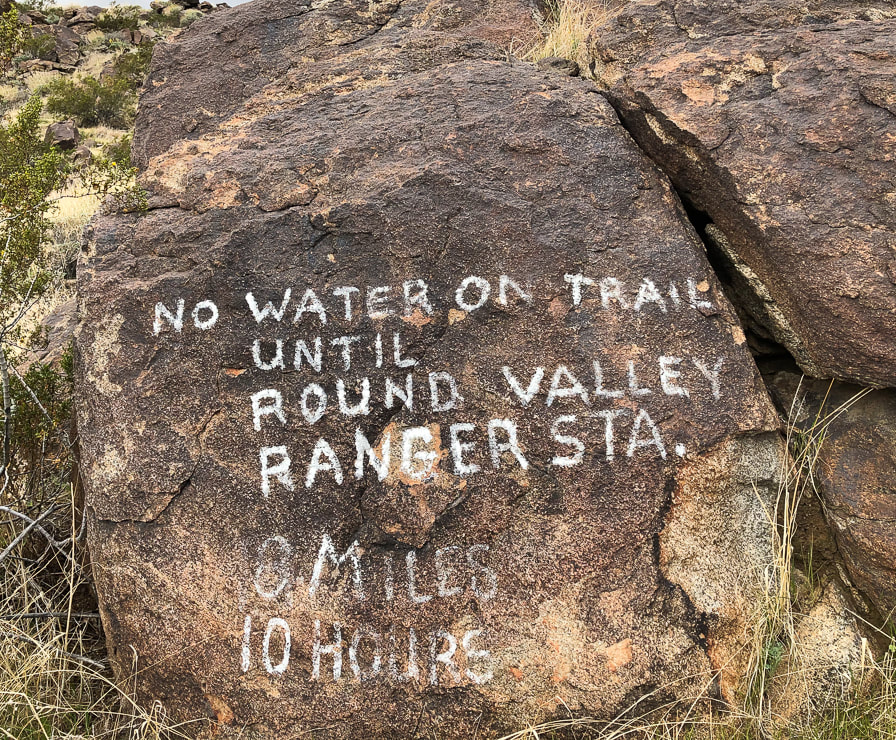 Rock near beginning of Skyline Trail at intersection with North Lykken Trail in Palm Springs
"No Water on Trail until Round Valley Ranger Sta.,  8 Miles, 10 Hours"
I was one of those six hikers on that inaugural Cactus to Clouds hike, as well as Ray Wilson, Roger and Maria Keezer, and Vickie Kearney.   We dubbed it “The First Annual Cactus to Clouds Challenge”, and I still have the t-shirt for the occasion.   We knew that this hike was extraordinary, but we didn’t foresee that 12 years later it would reach “superstar” status in the hiking world and list as #5 on Backpacker Magazine’s “America’s Hardest Day Hikes” in 2005.  Since then, Cactus to Clouds is on many an avid hiker's bucket list.  I shouldn’t be surprised that it has become such a phenomenon, for nowhere else in the contiguous 48 states is there such elevation gain in so relatively few miles, a great opportunity to test endurance.  Now, at its 24th anniversary, one can find numerous Cactus to Clouds (aka C2C) blogs and even a Cactus to Clouds Trail Wikipedia page.

Cactus to Clouds Hike Origin
Ray Wilson and I came up with the idea for the first Cactus to Clouds hike after we helped Bern Schwenn, a Sierra Club hike leader mark the upper reaches of Skyline Trail with yellow metal tags in the early 1990’s, when the Skyline Trail was faint.   The terrain is so steep here that there is only one safe way up, through trees bordered on each side by steep rock chutes.  After we marked the Skyline, we topped the steep escarpment at the end of the trail and found ourselves on the forested floor of Long Valley near the Palm Springs Aerial Tramway Mountain Station.  We realized that ascending from Palm Springs to Long Valley was a challenging hike, but the ultimate challenge would be to continue to Mt. San Jacinto’s summit.  Soon after, we hiked the entire route from Palm Springs to Mt. San Jacinto Peak.  We offered the Cactus to Clouds hike to members of the newly formed Coachella Valley Hiking Club in 1993, and Ray was the official hike leader.  We picked late October not only because it was Ray's birthday and he liked to celebrate with physical challenges, but it's also the optimum time of year for this hike.  There's less heat on the Skyline, less risk of snow on the summit while still having 11 hours of daylight.  Late October is usually pre-snow season in the San Jacinto Wilderness; however, on the Cactus to Clouds Challenge in 1996, we hiked through 4 inches of new snow at the top 1,000 feet to the summit.

Summit Celebration on Mt. San Jacinto - First Cactus to Clouds Challenge - October 1993
It’s obvious why the given name “Cactus to Clouds” suits this hike so well.  After all, it climbs over 10,000 feet from the low desert to an alpine peak.  But there is a story behind the naming of this hike.  Roger Keezer, one of the six original Cactus to Clouds hikers and member of Desert Sheriff’s Search and Rescue (DSSAR) of Riverside County created the phrase “Cactus to Clouds”.  While designing the t-shirts for this first annual hiking challenge, I thought the hike needed a name.  Since there’s such a huge gain in altitude, this hike ascends through five life zones.  It begins in the Lower Sonoran life zone of the low desert, treks through the Upper Sonoran life zone, traverses steep switchbacks through the Ponderosa Pines of the Transition Life zone, and finally climbs to the Arctic Alpine zone of San Jacinto Peak.  “It goes from cactus to the clouds”, Roger said, and the catchy phrase stuck.

I first met Roger and Maria Keezer at the initial meeting of the Coachella Valley Hiking Club at Philip Ferranti’s house in 1992.  Over the years, we have logged in hundreds of miles of hiking together, and shared a wonderful friendship and a mutual love of desert trails. 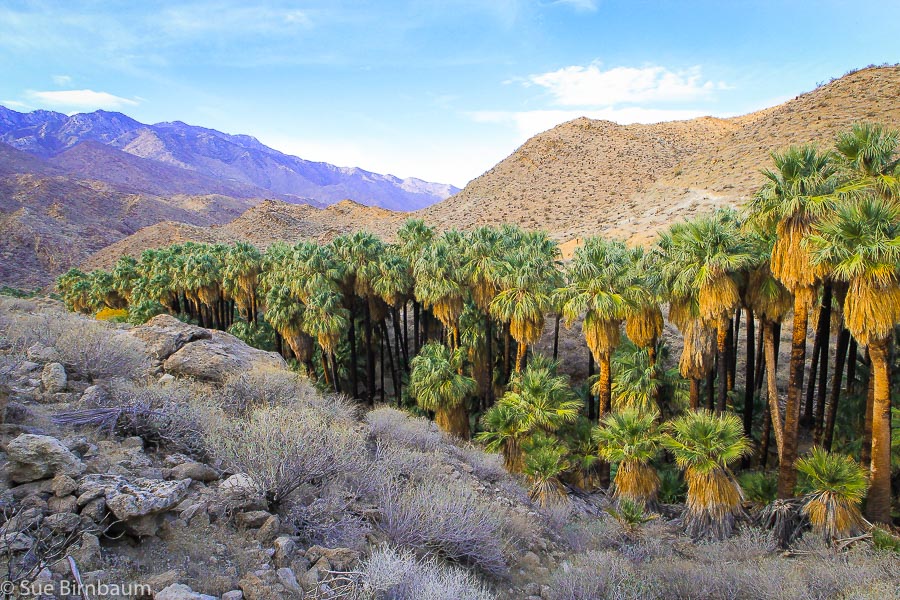 Indian Canyon in Palm Springs with Mt. San Jacinto on horizon
The warning on the boulder at the intersection of Skyline Trail and North Lykken Trail used to be the only information posted along the hike 20 years ago.  These days, there are “rescue” boxes and a detailed sign near this intersection that reads, “Before continuing further, please consider your preparedness for undertaking this hike.  There have been fatalities and many rescues of injured and lost persons attempting to complete this extremely difficult hike.” ​ 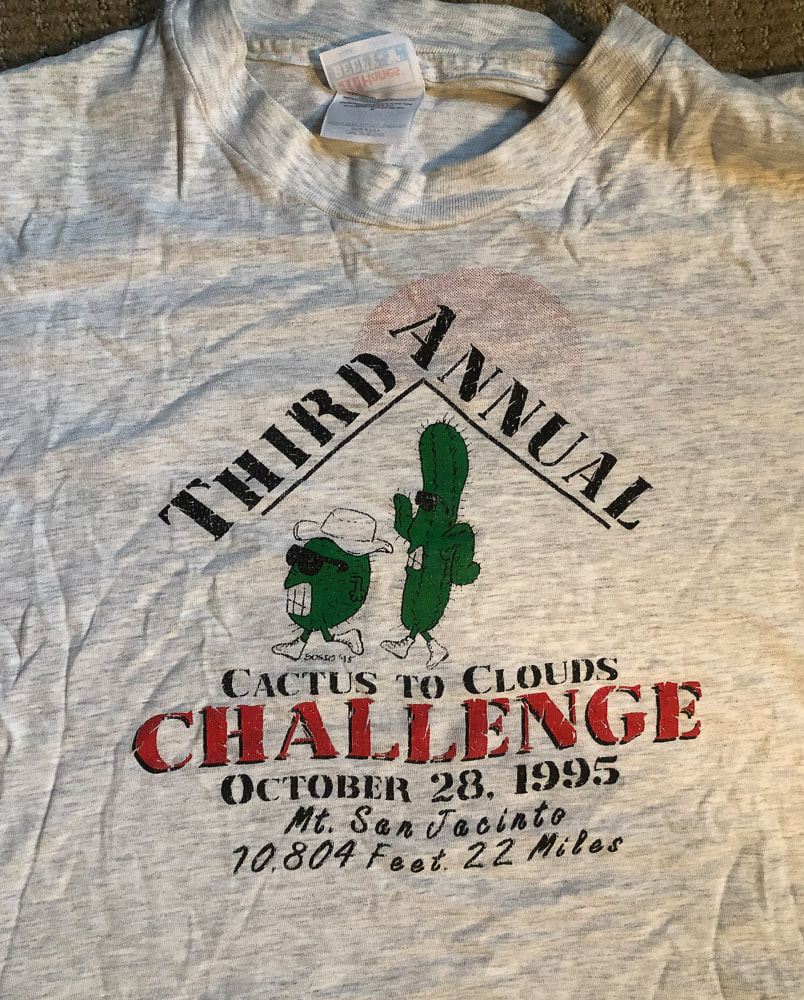 I still have the Cactus to Clouds Challenge t-shirt from 1995!
The Skyline Trail
At the “warning boulder”, we took a short break.  It was just before 6 a.m., and we realized that by stepping onto the Skyline Trail, we were committing to a gain in elevation of 8,000 feet in about 9 miles, making it one of the toughest trails in the country.  We had trained for this day and felt confident that we would reach the summit.  Energized from the walk up North Lykken Trail, we climbed numerous switchbacks up the ridge toward the tram station as the eastern sky lightened to orange and yellow.  The desert scenery is transcendent at the lower reaches of Skyline as you wind through Paleozoic metamorphic rocks that take on a brown and mauve hue in the soft morning light.  Tachevah Canyon drops to the north and the deep Tahquitz Creek opens to the south as the trail winds through the Agua Caliente Indian Reservation.  We were eager to get to the 4,500-foot elevation mark before the sun was overhead.

Finally, on the last mile of the Skyline, we made steady progress, pausing to rest at the end of a switchback with Coffman’s Crag towering above us.  This large granite monolith and the last thickly forested section of the Skyline Trail can be seen from Palm Canyon Drive in downtown Palm Springs, adjacent to one of the tram towers.  This section is now known as “The Traverse”.  Below this precarious perch the bright desert floor extends like a gold carpet below your feet.   It seems to take forever to get off the steep escarpment onto the level ground of Long Valley.  One by one, we walked over the steep edge of the terminus of the Skyline Trail and found ourselves on flat ground.  Fatigue had started to set in, but we had enough reserve to get to the summit, to one of the most awe-inspiring views. 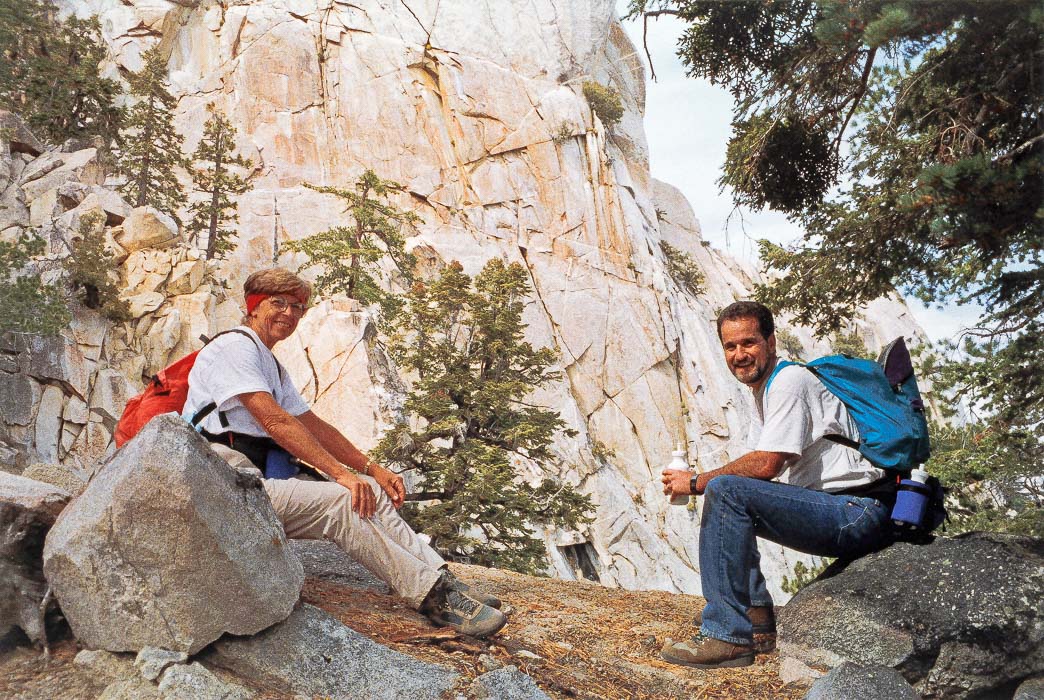 Maria Keezer, wife of Roger Keezer, who conceived the phrase "Cactus to Clouds"
First Cactus to Clouds Challenge, 1993 - Coffman's Crag behind them on upper Skyline Trail.
(I do not recall name of hiker on right)
Naturalist John Muir proclaimed, “The view from San Jacinto is the most sublime spectacle to be found anywhere on this earth”.  We finished the rest of the 2,300-foot gain, winding through switchbacks to the summit, passing downhill hikers who had started the summit hike from the tram station. Elated that we had actually climbed 10,300 feet to see the Coachella Valley and San Gorgonio Pass at our feet, we rested, lounging on the granite boulders of Mt. San Jacinto Peak before descending back down to the Mountain Tram Station.  Photos were taken with a film camera (we had no digital camera at the time!).   After 9 hours on the trail, we finally got to walk downhill 5.5 miles to the mountain tram station and then celebrate the completion of the first Cactus to Clouds hike with our friends.

More gain/mile compared to Death Valley's Telescope Peak
For the hiker that craves a steep trail with maximal elevation gain, there’s no other hike like it in the lower 48 states.  The elevation change in Death Valley between its lowest point (Badwater at 282 feet below sea level) and its highest point (Telescope Peak at 11,043 feet) is more substantial than the roughly 10,300 feet elevation change from Palm Springs to San Jacinto Peak; however the hike one way to Telescope Peak is 22 -24 miles, according to some sources.  Even though Mt. Whitney is the highest peak in the contiguous U.S., the elevation gain on the classic Whitney hike is 6,100 feet, which pales in comparison to Cactus to Clouds.

The dramatic and quick elevation gain on the Cactus to Clouds hike would not be possible were it not for the mountain-building forces created by the San Andreas Fault system on the east side of the range and the San Jacinto fault on the west side.  The San Jacinto Mountains comprise a block squeezed between these two major active fault systems.  San Jacinto Peak’s eastern escarpment is one of the steepest in North America because it rises over 10,000 feet in only a few miles.  San Jacinto Peak has risen so quickly that sediments have not had time to accumulate at its base, adding height to the dramatic and vertical northeast face.

Some Cactus to Clouds hikers say the toughest part of the hike is walking the last quarter mile on the concrete path leading up to the tram station.  After hiking 22 miles and gaining 10,300 feet, the last thing you want to do is climb that walkway.   On the first Cactus to Clouds Challenge, we reached the tram station by 5:30 pm and took a well-deserved tram ride down to the lower tram station in Chino Canyon.  That evening, we celebrated our “First Annual Cactus to Clouds” accomplishment with Philip Ferranti, founder of the Coachella Valley hiking club with lots and lots of Mexican food.

It’s amazing to realize that the past 20 years have flown by, and most members of our hiking group are still hiking together.  It’s also amazing to know that we started such a great hike 20 years ago and when Roger Keezer called it “Cactus to Clouds”, we knew there could be no better name for this ultimate desert hiking challenge.  I still have the annual “Cactus to Clouds Challenge” t-shirts for 1993, 1994, and 1995.  They’re pretty worn out, but I don’t plan on giving them up because they are hard-won and represent very special memories. 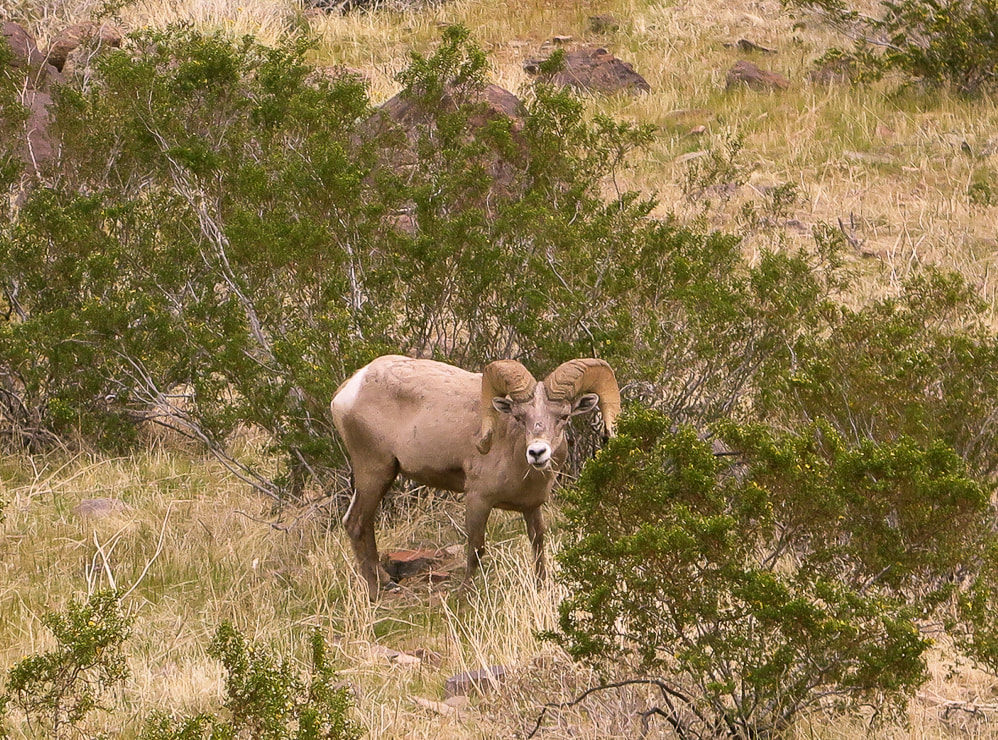